What did People Do Before Air Conditioners?

It may come as a major shock to young people, but there was a time before air conditioning when people simply suffered through the heat. We in St. Louis take this technology for granted, so it’s pretty shocking to think that the modern air conditioner has only been widespread for about 60 years. It’s interesting to look back at the history of the air conditioner in order to appreciate just how good we have it.

The concept of cooling a room actually dates back to ancient Egypt. There, leaves were hung in windows and moistened with trickling water. As the water evaporated, it would cool the room as air blew in. The ancient Romans used water from aqueducts to cool the walls of rooms.

The first rotary fan to cool a room was developed in the 2nd century in China. The first model used manual power to turn wheels which would turn the fan. Later, the wheels were turns using water. Water was also added to blow from the fan to cool the people in the room. In about 1000 AD, this had become fairly widespread in China.

The first modern air conditioner was invented in Buffalo, NY in 1902 by William Carrier. This was first done to control the humidity in textile mills. Realizing that controlling the humidity could also control the temperature in the room, he founded The Carrier Air Conditioning Company of America in 1906. The first private home built with air conditioning was completed in 1914.

Everyone could see the great potential in air conditioners, but unfortunately the Great Depression and then World War II put a hold on sales. In the post-war 1950s, however, residential air conditioners experienced tremendous growth and allowed our nation to grow even faster. Now, people in hot or desert climates could actually get work done during the impossibly hot summer months.

At Classic Aire Care, we’re proud to continue this tradition started all the way back in ancient Egypt. If you have an air conditioning issue or would like to learn about new units, contact us right away.

For an Estimate or service

Your Promotional Selection Has Been Applied! The Different Types of Furnaces Available for Your St. Louis Home Is Your Furnace Up to Code? 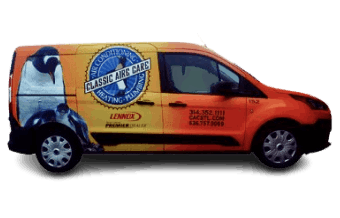 Save on Service & Enjoy Peace of Mind